15
15
You are impersonating as:
Change customer

At the Sourdough Library, With Some Very Old Mothers (NY Times)

Article via The New York Times 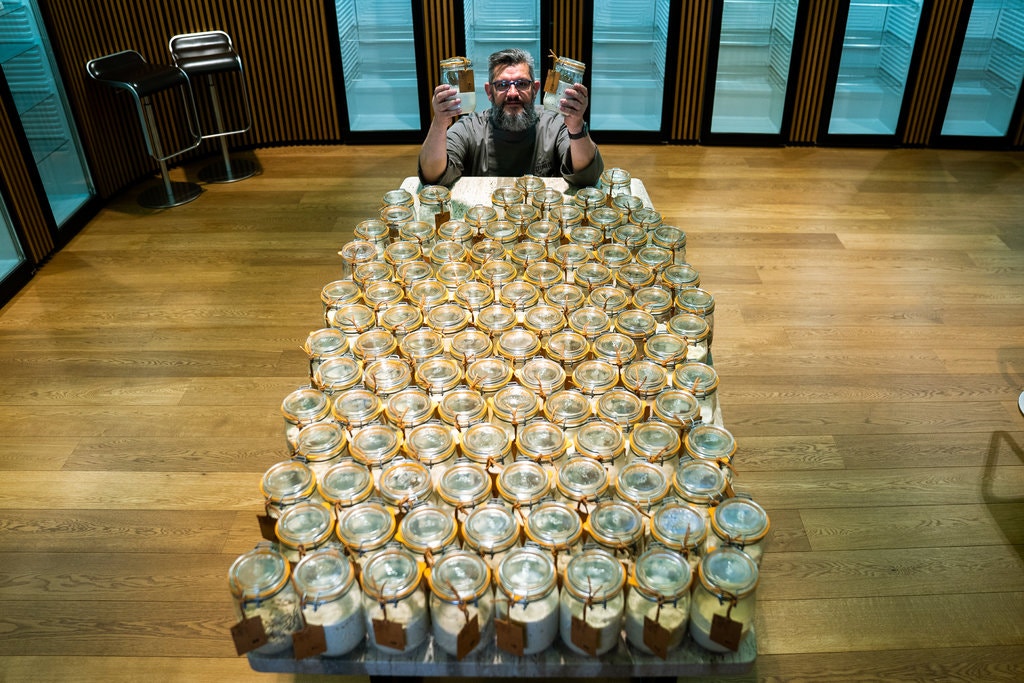 In these housebound times, Americans have gone stark baking mad. Shut-ins are channeling their anxieties into pandemic pastries and quarantine cookies, some with icing piped in the shape of surgical masks, others frosted with the face of Dr. Anthony Fauci. Baking essentials such as yeast and flour are in short supply, and Google searches for bread recipes are on the rise, so to speak.

Curiously, during this apocalyptic spring, the best thing since sliced bread turns out not to be sliced bread. The most coveted isolation loaves seem to be sourdough, a knobbly, rugged variety that requires patience, handmade fermentations and something like affection. “Working with sourdough is part art, part science,” said Karl De Smedt. “You don’t tell the dough when it’s time to be shaped. The dough tells you.”

Mr. De Smedt is the curator of the world’s only sourdough library. Located in the flyspeck village of St. Vith, 87 miles southeast of Brussels, the library houses the world’s most extensive collection of sourdough starters, those bubbling beige globs of bacteria and wild yeast — known as “mothers” — that bakers mix into dough to produce flavorful loaves with interestingly shaped holes. If a mother isn’t regularly divided and kneaded and fed with flour and water, she will eventually go dormant or die. “A starter has its own heart, almost its own will,” Mr. De Smedt said. “Treat a starter nice and it will reward you tremendously, like a good friend.”

Like Norway’s Svalbard seed vault, which safeguards crops against disasters, and the Ice Memory project in Antarctica, which protects glacial ice cores threatened by climate change, the sourdough library is essentially a preservation center. Besides showcasing geographically diverse varieties of yeast, it conserves a burgeoning stockpile for future generations to study.

“The samples serve as backups for bakers and bakeries that might lose or damage their own supply,” said Mr. De Smedt who spoke by video from his home in Brussels. Although the library, created in 2013 by the Belgian bakery supply company Puratos, is not open to the public, its online database offers detailed notes on the colors, flavors and textures of all the starters.

Mr. De Smedt, 49, is a convivial fellow who wears a full beard and an air of becoming modesty. “The idea for the library was hatched after a Syrian baker of traditional chickpea cookies contacted Puratos to see if the company would document and preserve his starter,” Mr. De Smedt said. “His two sons wanted to switch from his time-honored leavening to commercial yeast. He feared that the starter would disappear, and hoped that we would find a home for it.” 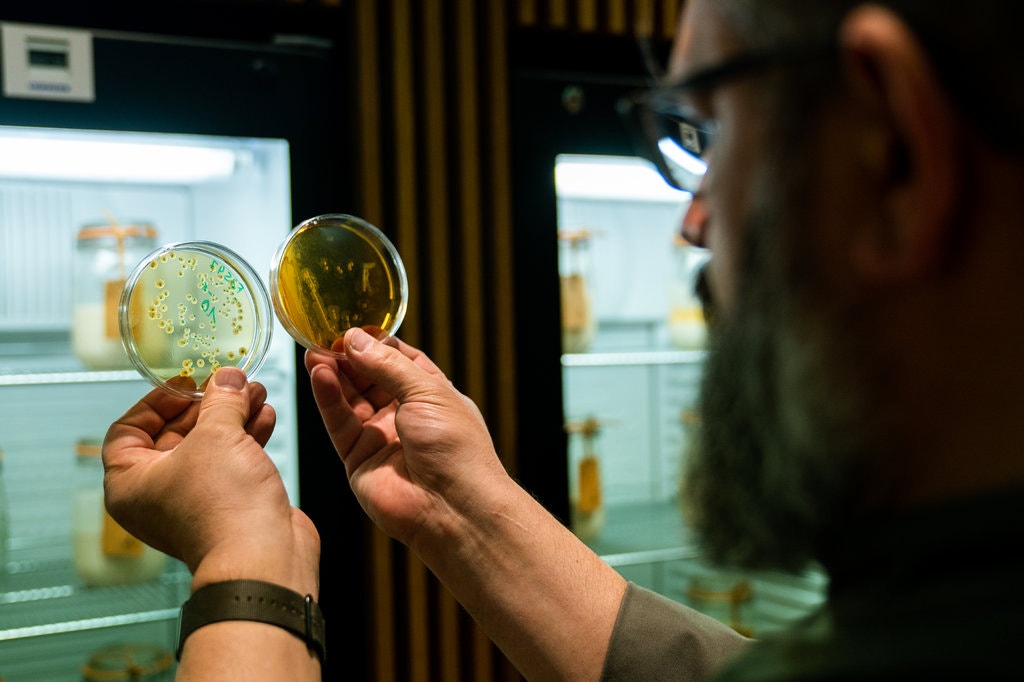 “Sourdough is the soul of many bakeries,” Mr. De Smedt said. “When bakers entrust you with their souls, you’d better take care to it.”
Credit: Puratos Center for Bread Flavour

The walls of the library that Mr. De Smedt presides over are lined with illuminated cabinets kept at a nippy 39 degrees Fahrenheit. Behind the glass fronts are shelves of Mason jars in which Mr. De Smedt’s starters burble away. At last count, there were 125. Mr. De Smedt ticked off their names: “Roberta, Rebola, Vitus. …” In order to preserve the unique character of individual strains, he refreshes them every two months with back stocks of the original flours used by their providers. “The donors are required to contribute yearly supplies to the library for maintenance,” he said. “We insist on that to minimize the impact of change.”

Sourdough is the oldest form of leavened bread. Last year Seamus Blackley, father of the Xbox, baked a loaf using what was purportedly 4,500-year-old yeast scraped off ancient Egyptian pottery. All modern recipes begin with a starter, basically a flour-and-water slurry colonized by bacteria and wild, airborne yeasts that eat, breed and exhale carbon dioxide, which helps the bread rise. The tangy taste and brightly acidic smell derive from lactobacilli, cousins of the bacteria that curdle milk into cheese and yogurt. Starters are bespoke to the environments in which they were created; no two sourdoughs taste exactly alike.

Mr. De Smedt travels the world for new specimens. He prioritizes renown, unusual origins, the type of flour used, and the starter’s approximate age. “Most importantly, the sourdough must come from a spontaneous fermentation, and not inoculated with a commercial starter culture,” he said. He adds up to two dozen new sourdoughs to the library every year, from cooking schools, home-bakers, pizzerias, and artisan and industrial bakeries. “Sourdough is the soul of many bakeries,” he said. “When bakers entrust you with their souls, you’d better take care to it.”

He has harvested starters from 25 countries, including Slovenia, Peru and Singapore. Starter No. 1 is from Altamura, Italy. The bread is traditionally made of semolina flour, the ground form of durum wheat, and dates at least to 37 B.C., when the Roman poet Horace praised it as the best he had ever eaten.

“Number 100 is special because it’s Japanese and made with cooked sake rice,” Mr. De Smedt said. “Number 72 is from Mexico and has to be refreshed with eggs, lime and beer.” Number 43 is a sentimental favorite. “It’s a San Francisco starter, and was my first one I ever saw,” he recalled. “When I became a test baker for Puratos in 1994, one of my tasks was to refresh 43.” Indeed, he baked his first loaf of sourdough with it.

He has no way of knowing which of the 125 starters is the oldest. “We can’t carbon-date them,” he said. “The microbial colonies of a starter can change entirely, depending on how it is fed and maintained. If someone insisted she had a 500-year-old sourdough, I’d have to believe her.”

Two years ago Mr. De Smedt and a film crew tracked the path of the Klondike Gold Rush’s starter-packing prospectors, starting in Seattle, then Alaska, and ending the expedition in Dawson City, Yukon, in northern Canada. “At the turn of the 20th century, stampeders had to show mounted police at the Canadian border that they had enough provisions to survive a year in the Yukon,” he said. “In addition to potatoes and canned goods, the stampeders would bring starters, often in linen bags tied around their necks, so that they always had dough ready to make flapjacks.”

Mr. De Smedt hit the mother lode in Whitehorse, the Yukon capital, where he met up with Ione Christensen, the 86-year-old former mayor. Her starter was passed down from her great-grandfather, Wesley David Ballentine. “It’s a family pet, if you will,” she said. Back in 1897, Ballentine stowed the starter in a flour sack and trekked over the Chilkoot Pass on his way to the Klondike gold fields. On cold nights, he and his fellow stampeders would cuddle with the sacks to keep their contents warm and alive.

“These men slept with their mothers,” Niki Segnit, the British food writer, said, “which makes them lucky they were nicknamed ‘sourdoughs,’ and not something nastier.” 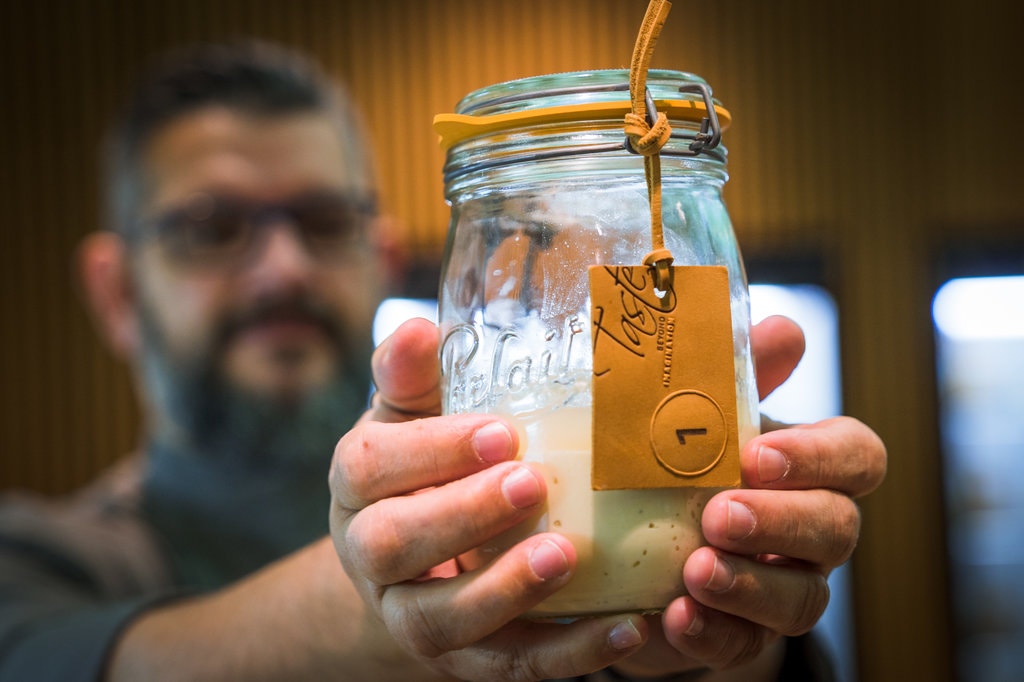 Mr. De Smedt with a starter labeled No. 1, for a type of bread, made of semolina flour, that dates back to Roman times. He has harvested starters from 25 countries, including Slovenia, Peru and Singapore.
Credit: Puratos Center for Bread Flavour

Mr. De Smedt shipped one chilled sample of Ms. Christensen’s starter, labeled “106,” to the library and another to researchers at the University of Bari in southern Italy for DNA sequencing.

A collaboration with biologists Rob Dunn and Anne Madden at North Carolina State University led to a surprising discovery about the microbial interaction between bakers and sourdough. “The assumption was that the microbes on the bakers’ hands influenced the flavor of the bread,” Mr. De Smedt said. Bakers from 16 countries were asked to make starters from a common flour and recipe, and nurture them. On July 4, 2018, the bakers and their mothers converged at the Puratos facility in St. Vith to make bread.

Afterward, researchers swabbed the bakers’ washed hands and cultured the microbes. The conclusion reversed the expectation: The microbes on the hands of the bakers mirrored the microbes within their starters. The bakers had become their bread. “The bakers’ hands reflect the life they have lived,” observed Dr. Dunn, “a life with their fingers and thumbs in dough.”

In addition to yeast and bacteria, sourdough harbors many secrets. One is whether very old starters retain microbes from the person who made them. “Does the starter you got from your grandmother still have some of her body microbes?” asked Dr. Dunn. “Is your grandmother alive in the starter she gave to you? I think that we will find that in some cases the answer is yes.”

Mr. De Smedt, like many of his countrymen, has spent the lockdown fermenting at home. He has occupied his time by baking bread, writing blog posts for the various Puratos websites and reviewing the French and Dutch translations of a book by Anita Sumer of @Sourdough_mania.

He has not seen his beloved starters since March 24, and does not plan to return to nourish them again until April 27. If stopped by police for violating curfew, what will he say? “It’s not that easy to explain that I have a sourdough library to take care of,” Mr. De Smedt allowed. “I guess I could claim it’s an emergency: 125 mothers require my attention.”

Save preferences Cancel and return